Wow This Thing Is Still Here

Well it had clearly been a while since I've consistently paid attention to my strength training and physical health in general. My excuses are that I had a few major life changes and personal issues start at the end of 2012 and carry on through for a few months or years depending on what we are talking about.

Anyhow things are more stable now so I'm thinking it would be a good idea to track my thoughts on goals here.

One of my long term bad habits has been Dr. Pepper. I love it and starting in high school I have been a regular consumer. I know that soda is not a good thing on many levels but hose 23 flavors just taste so good, especially after or during a stressful day. For the last few weeks I have minimized Dr. Pepper intake with some success. Rather than having one or two a day I've been drinking 1-3 per week (only on the weekends). The theist for the Dr, has been strong at times but now it is pretty manageable.

I was hoping that this simple change would have profound, or at least significant impacts on my total body weight and physique so I tracked my weight for the last few weeks. The results were IMMEDIATE, and short lived (see chart below). In about two weeks I dropped 5 lbs, which was pretty exciting, and then it stayed there for the next 4 weeks it has pretty much stayed in the same place. Hmmmm. You'd think that taking 250 or so calories out of the input stream 5 days of the week would have more of a lasting impact, but the data says otherwise. 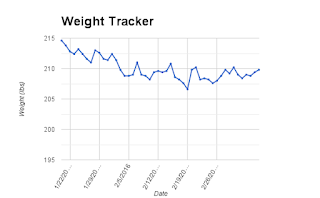 I also cut out breakfast (and I am not aware of a compelling reason to not do so) in order to limit caloric intake as well. It appears that I am compensating  for the lack of calories that normally would have been coming in through liquid caramel colored sugar water and daily doses of Egg McMuffins (I hate to admit it but that particular fast food breakfast option is pretty tasty to me).

I feel like I have been eating decent amount, meaning not gorging at lunch and dinner, but things aren't moving in the direction I'd like. So I guess I need to get more serious.

I'm easing back into things so I can better manage long term commitments to training and good nutrition. For the last three weeks I've been working on pushup's using this canned routine. It has been satisfying to see some performance increases in tracking my progress and just to feel my muscles doing some work. I'll plan on sticking with this program through March, by which time the garage will be warm enough so as to nullify any 'comfort excuses' for not getting in there and lifting three times a week. I'd like to be able to do 100 pushup's in a single set but I'd also be happy to just be able to bust out a couple sets of 50. So this bit is good and it is keeping me motivated.

I'll start tracking my intake this week just to see where I am and then make adjustments where needed. I also will be doing two tabata workouts on the airdyne to increase caloric expenditure as well.

I'll check back in about a week from now.
Posted by Unknown at 8:34 AM No comments:


I did a lot worse than I had originally planned but did about as well as I expected going into the meet. The reasons I signed up for the meet include: motivation to continue training when life gets busy, experience a PL meet, see what I can do under real judging. I fulfilled all of those goals and despite my poor total (and awful squatting) I really enjoyed the meet. I had hoped to set PRs or at least match gym PRs. That didn’t happen, I sabotaged that opportunity a long time ago.


How to Stop Progress and Sabotage Your First PL Meet


When I first started Callador’s 4x4 method I changed my diet up in order to lose some fat and hopefully maintain strength while I drop down to a solid 198 lbs (~220-225 just before I started). Cutting calories and drastically changing food types (regular decent junk to low-carb paleo) is not a good way to progress. I lost 10-15 pounds in about 2 weeks and got sick. It really screwed up what had been some really good progress. I don’t think the program was flawed at all, I just made changes that I knew weren’t smart but thought I'd somehow I’d beat the odds.
Scheduling was a bit out of my control but it certainly played a role in my final weeks leading up to the meet being not very useful in preparing for a solid performance. I had to sell my house, write and defend my PhD thesis, get a job prepare for a PL meet and be a normal Dad/Husband over the last 2 months. If I could have entered a meet at a different time I would have but I didn’t know where I’d be in May (graduation date? job somewhere?) and this was really the only meet within reasonable driving distance that I could find. Smashing all these responsibilities into a small time frame made juggling life trickier than usual which caused training and proper nutrition to take a back seat for a while.I don’t list this stuff as a bunch of excuses, my performance is what it is, but just put it all out there to put my PL performance in context.


The meet was a positive experience. It was way busy with 46 male lifters in the unequipped powerlifting group so probably ~60-70 lifters when the equipped men and all the women are added to that number. It was held at a gym that was built and is owned by an old school Olympic lifter and had plenty of racks squat stands and bars and weights for everyone to warm up with. It was dusty and dingy with the walls were covered with all sorts of strength athlete posters and pictures from magazine pages (BBers, Olympic Lifters, Powerlifters, etc). Most of the equipment was custom fabricated (which I find way cooled than commercially produced stuff because it has character). The people attending lifters and spectators made up a pretty diverse group of people (families with little kids, a bunch of college and high school wrestling teams, and more of the Jim Wendler looking dudes) and all of them were super cool and congenial (very different from other more mainstream sporting events). I had a great time and plan to do another meet in the future (probably next spring, don’t know which one).


My future employment requires me to live in Milwaukee, WI for ~2 months, then in July I’ll move to Columbus, OH. I’ll get a temporary membership at a good gym in Milwaukee then in Columbus I’ll drive over to Rogue and pick up a rack (no shipping) to set-up a proper home gym (no more wooden squat stands Stroup). I’ll deload a bit and work up to handling decent volume over about 6 weeks, then ride the full body TM for 6 weeks or so then switch to a split routine (perhaps TM for a while or maybe I’ll go back to Calladors 4x4). By this fall my meet PRs should be sets of 3-5 and I’ll be ready to push PRs again.


My good camera died so the first two squats aren’t here. Also my phone lost the sound of the recording when I sent the files to my computer so I hope you don’t mind a little PJ.

It is that time of year when everybody is going to lose weight, run a marathon, buy (and use) a new gym membership, or get generally fit. I think goals are good but they need to be s.m.a.r.t. to be effective. Goals have to be more than a want they have to be realistic measurable and planned out. My goal for a meet in April is to total 1215 lbs. If you are confused as to what this means, read on.

Email ThisBlogThis!Share to TwitterShare to FacebookShare to Pinterest
Labels: training

It is required that I reveal the secret to my continued success. I have abandoned my gym in a closet for Joes Garage. A friend of mine, named Joe, is also in the pursuit of strength. He has his own rack, bar, ~300 pounds of weight, and a two car garage with only one car in it. There was plenty of room for my equipment along with his. I made a make shift chalk box and Joe provided music (an ipod fitted with computer speakers playing mid-nineties grunge with some newer and older stuff mixed in). Schedules have been aligned and much labor has been carried out under the bar in Joes garage.

It is ideal to have a training partner and Joes garage has facilitated this. Training partners help you keep up on your training. There have been many days when I felt tired but we had a plan to train. I could have stayed home but that would have been really lame and my testosterone levels would have probably dropped due to such a spineless act. As stated in Robert Redford's A River Runs Through It: 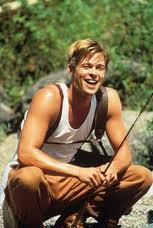 Like Brad Pitt is deedicated to fishing, in Joes garage we are dedicated to training, we don't miss training sessions.